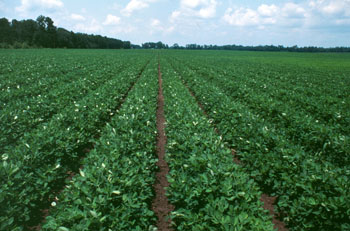 Pre-planting tillage ensures a well-prepared seedbed. Seeds are planted one and half to two inches (four to five centimetres) deep, one every two to four inches (5–10 centimetres) in the Southeast and Southwest, and four to six inches (10–15 centimetres) in the Virginia-Carolina area, in rows about three feet (one metre) apart. The row spacing is determined to a large extent by the type of planting and harvesting equipment utilised.

Peanuts may be cultivated once or twice (depending on region) to control broadleaf weeds and grasses. A climate with 200 frost-free days (175 days for Spanish varieties) is required for a good crop. Warm weather conditions, adequate moisture, and fertile, sandy soil result in the appearance of peanut leaves in 10–14 days after planting. Farmers generally follow a three-year rotation pattern with cotton, corn or small grains planted on the same acreage in intervening years to reduce disease problems. In addition, many farmers utilise irrigation in an effort to reduce crop stress and thereby enhance opportunities for the production of high quality peanuts.

Integrated pest management is utilised in order to control weeds, diseases, and insects. Diseases caused primarily by several fungal organisms are particularly troublesome and generally require chemical control. Weeds are controlled using either chemical or mechanical methods or a combination of the two.

The peanut harvesting process occurs in two stages. Digging, which is the first stage, begins when about 70% of the pods have reached maturity. At optimum soil moisture, a digger proceeds along the rows of peanut plants driving a horizontal blade four to six inches (10–15 centimetres) under the soil. The digger loosens the plant and cuts the taproot. A shaker lifts the plant from the soil, gently shakes the soil from the peanut pods and inverts the plant. A windrow of inverted plants results and this exposes the pods to the sun. The peanuts are now ready for the second phase of the harvest — combining. After drying in the field for two or three days, a peanut combine (also known as a thresher) separates the pods from the vines, placing the peanut pods into a hopper on the top of the machine. The vines are returned to the field to improve soil fertility and organic matter. Freshly harvested peanut pods are then placed into drying wagons for further curing with forced hot air slowly circulating through the wagons. In the curing process, moisture content is reduced to 8–10% for safe storage.