Runners have become the dominant type due to the introduction in the early 1970s of a new runner variety, the Florunner, which was responsible for a spectacular increase in peanut yields. Runners have rapidly gained wide acceptance because of their attractive kernel size range; a high proportion of runners are used for peanut butter. Runners, grown mainly in Georgia, Alabama, Florida, Texas and Oklahoma, account for 73% of total US production.

Virginias have the largest kernels and account for most of the peanuts roasted and sold in their shells. The kernels also are a popular choice as flavoured peanuts sold in cans and jars. Though Virginia peanuts are grown mainly in southeastern Virginia, they also are grown in northeastern North Carolina and West Texas. Virginia type peanuts account for about 22% of total US production.

Spanish type peanuts have smaller kernels covered with a reddish-brown skin. They are used predominantly in peanut candy, although significant quantities are also used for salted nuts and peanut butter. They have a higher oil content than the other types of peanuts which is advantageous when crushing for oil. Grown primarily in Oklahoma and Texas, Spanish type peanuts account for 4% of US production.

Valencias usually have three or more small kernels to a pod. They are very sweet peanuts and are usually roasted and sold in the shell; they are also excellent for fresh use as boiled peanuts (a popular and nutritious snack in the southern states). Because of the greater demand for other varieties, Valencias account for less than 1% of US production and are grown mainly in New Mexico. 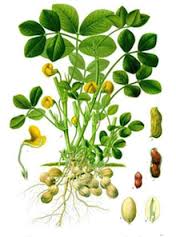 Marker-assisted breeding will improve new varieties: U.S. peanuts farmers can expect a “paradigm shift” in peanut production within a few years when breeders begin taking advantage of a new tool to select for improved traits in new varieties.